Pork loins are hard to cook because they are very easy to dry out. I wanted to come up with some kind of recipe that would help prevent that….

½ tbsp. sriracha (this is optional)

wok oil (can be found in the Asian section of your grocery store, it may be called stir fry oil also)

1 tbsp corn starch (add once the sauce is mostly cooked)

preheat your oven to 400

take your pork loin and filet it open, you want it to lay flat so cut in a spiral so you can unroll it. 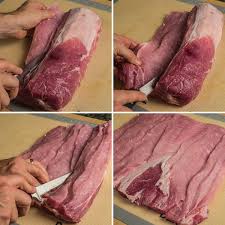 You will want a very sharp knife and pat it down with some paper towel so it won’t slip on you, that would be a real good way to slice a finger off. After you cut it set it aside. Next slice up your peppers, I used a red and yellow but if you are a fan of green that will be good too! Heat up a skillet, sprinkle some wok oil and cook your peppers until you see them get soft and a little sear on them. In a bowl mix your soy sauce, vinegar, sriracha, and brown sugar, once your peppers are cooked at them to the bowl and make sure they are completely covered. Next, remove the peppers leaving the liquid in the bowl and place in the center of your pork loin. Use either twine or skewers to hold it together. I recommend string but of course, I didn’t have any so I used skewers, and I used an industrial method of cutting them short! You have to use what works best, I told my husband I think I need a pair of those shears for the kitchen now!

Once you get your pork loin wrapped up apply a liberal amount of pepper all the way around it, patting it down so it will stick. Next heat a heavy skillet…of course, I recommend a cast iron, shocker! You want it to be really hot when you add your wok oil you want to see it begin to smoke. Carefully add your pork loin, sear it on all sides. If you use wooden skewers like I did its kinda hard to cook on those sides without the sticks being pushed out so at least sear two sides. If you use a cast iron next just add the whole pan into the oven once it is preheated if you used a none oven-safe skillet then remove and put in an oven safe dish.

In a pan add the sauce from your bowl and the rest of your sauce ingredients, either crush your garlic with a knife and chop it or use a garlic press. Cook until the garlic becomes fragrant. Next, take your corn starch in a bowl and add enough water for it to dissolve completely then stir into your sauce, let it cook until the glaze gets thick, you want it thick enough so it won’t run off of the meat when you apply it. 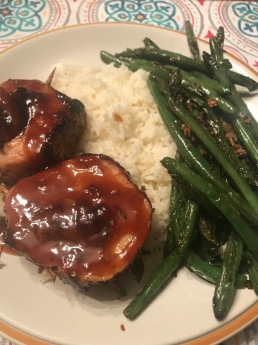 Once your pork loin is completely cooked (use a meat thermometer to monitor it) remove from the oven and spoon over the glaze, I add quite a bit of it making sure it is completely coated. Put back in the oven with your broiler on high until the glaze caramelizes, about 5 minutes.

REMEMBER TO TASTE AS YOU MAKE!